Using xclock to get notified when a task finishes

xclock is a tool that comes bundled in almost all Linux distributions, but all we use it for is to check whether your $DISPLAY variable is set correctly. (When you configure $DISPLAY and start xclock, an analog clock would pop up in the correct display.) 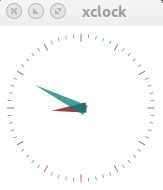 This underrated xclock can be quite handy to get notified when a long-running task finishes. For example, I have this gitolite server which uses git pushes to update. A push may take several minutes if the number of repos is huge, so you just can't stare at the terminal till it finishes. What I do is

and move to another task. A clock will pop up just when the push is completed. This is also useful when you compile an app that takes ages to build.

Hmmm.... ok. If you use KDE, here's a way to use native Plasma notifications instead: