Although Swift is a young language it is extremely diverse. There is no particular way to develop in Swift, it opens countless ways to go. Apple announced that Swift is the first protocol oriented language. I highly recommend you to watch the video regarding this topic from WWDC 2015. So what is a protocol oriented programming in its heart?

First of all, it's difficult enough to give a precise definition of any programming paradigm whether the talk is about the object oriented paradigm or the protocol oriented one. You need to understand that both are designed basing on simple units and concepts, and both are supposed to solve the certain set of problems.

Anyway it's important to understand what each paradigm stands for and when it is worth applying one. I'll try to demonstrate the difference between OOP (object oriented paradigm) and POP (protocol oriented paradigm)

What is my Object?

Now let's talk about OOP base unit – an object. If you're a major in any OOP based language (such as Java) probably every application you start with a class. Classes are not just templates for objects of their type, they are ultimately the same objects!

But what is an object itself? Well, it's a kind of an entity that operates the more primitive value types. Being an entity basically means uniqueness which in its turn says that every object might behave differently depending on its operated values.

Of course, you know about encapsulation. In OOP we use it designing our Classes in order to provide objects' security. But does it work?

You might encapsulate some of your data from illegitimate access. But your object still has the full and direct access to its any part. And it turns out that your worst enemy is yourself.

I started talking about the security concept to show you the key difference between types we use in two different paradigms. As soon as you have an object even with an encapsulated data, it can be modified and depending on the modification process important data might be damaged. Value types were designed as primitive units. It doesn't mean they are immutable only. But once you modified a value type, it's conceptually a new unit.

From a mathematical point, objects are entities of such importance that they create new probabilistic series or they simply affect the context they were created in.

It's a good practice to start any model implementation from its basic design. You research the connections between given values and basing on this research you can create a scheme of relationships between objects.

A relationship might be declared as an inheritance or a protocol implementation. The difference is that the inheritance as its name suggests gives an opportunity to objects to inherit each others class members (properties, methods and initializers) and later to override them. As for protocols, an object implementing a protocol must implement its required members (methods and properties).

Polymorphism is another key feature of OOP. It gives types' flexibility. For instance, if you design a method working with a Vehicle type then this method can work with any its subtype (e.g. Car).

These key concepts give an incredibly flexible way to create models of hierarchy for any kind of relationship. But somewhere it's not flexible enough...

To show the OOP concepts we'll write a simple program that defines relationships between objects in the Zoo.

First off, the zoo has animals. So we need a hierarchy of animals' types. For simplicity let's have only Dogs, Elephants and Ants in our zoo. Now we need to remember the biology school course to create base classes and their subclasses. A Dog is a Canid which is a Mammal which is an Animal. With this said, an Animal type is the highest one in our model. 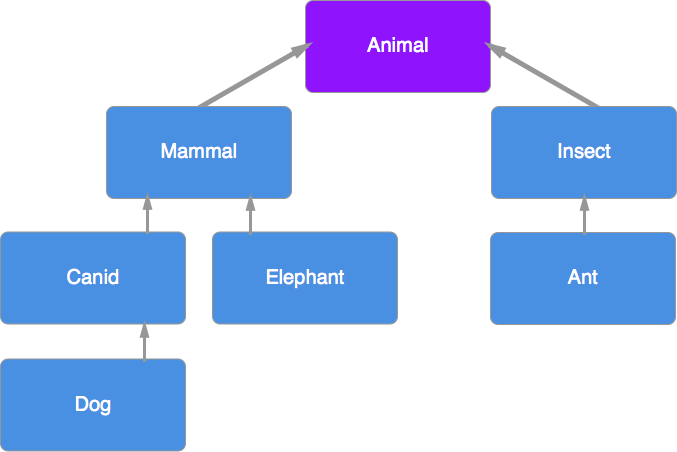 OK, now we have our model designed. Let's get started with the code.

Zoo stuff. For zoo we need a little bit more things than for other implemented classes. First, it's about storing animals. Second, it's about getting animals and filtering them by their types.

Let's play with the code.

This works just fine. OOP is great, isn't it?

The zoo is plain weird though. We have dogs there although they've been domesticated for thousands of years which makes them our Pets. Congratulations, we just got a new type.

But wait... How do we extend our model? The naïve way is to do something like this:

But it turns out that this class can't be inherited by dog.

This is so called Deadly Diamond of Death.

The code above is wrong, your compiler won't allow this to happen. Otherwise it would be impossible to know which method to inherit and which to override. Multiple inheritance is not allowed in Swift.

But how do we fix this?

Actually, this is just a workaround the issue. Now the question is if it would be suitable for our model? My answer is no. We lost the flexibility with this protocol. Imagine you need to operate Pets but now how to work with their base types? We have a relationship around Animal model but not around Pet.

Protocols are our Heroes.

It'd be stupid to continue the previous scheme. It's not flexible anymore, of course if Pet is just a secondary protocol you will be alright but if not, it's better to come up with a flexible model for protocols. Let's talk about protocols and why they play such an important role in Swift.

OOP concepts are good for classes. But in most cases they are not so good for value types such as structs and enums.

Do you remember what we were saying about objects? So it's time to have a talk about value types since in POP the basic unit is a value type.

A value type is a primitive one that is generally operable by high level types such as objects' ones. It's similar to primitives – integers, doubles and floats which are value types as well. So each time you work with a struct (whatever it is) you can imagine that you work with the same value as let's say 10 (which is a primitive). Going forward, value types represent a kind of container for other types. Keep this in mind since this is a basic concept of POP.

The Zoo strikes back!

I hope for this moment you are more familiar with the basics of POP. So let's return to our zoo implementation and get it working with the POP concept.

Pay attention that now we use value types for Dog, Elephant and Ant. In fact they are primitive units and besides we need a more flexible model so we apply the POP concept.

The new zoo stuff. I'll cover its specifications below.

Let's add more convenience to adding objects to the zoo. For this we will overload += operator.

Remember the issue we got with the Pet protocol for OOP model. Imagine we need a Robotic Zoo with Robots. But a RoboticDog is still a Pet!

All we have to do is to add new value types.

The Zoo is flexible. So we just need to create a Robotic Zoo!

We've walked through the concepts of OOP and POP and differences between them. And still the covered part is very tiny since POP is much more than what we were talking about. Besides Swift 2 brings a new feature of protocol extensions so it extends the possibilities even more.

I strongly recommend to read Erik Kerber's article on RayWenderlich where he covers new features in Swift 2 regarding POP and shows how to use it in practice.

I'll continue to investigate POP and will try to keep you updated!

P.S. Special thanks to my friend Nino for editing this article. :]

How to save a NSArray/NSMutableArray in Core Data