Since March 2015, Compose has supported MongoDB 3.0. One of the nicer features of Compose is its automatic backups. However, when I needed to restore from a backup the other day, it took some back-and-forth with Compose's support team to resolve, and there were a few surprises along the way.

My hope is that this article will be outdated soon, but here's what you need to know today.

As recommended by the Compose support team:

The rest of this article will go into more detail. But first, some key information: 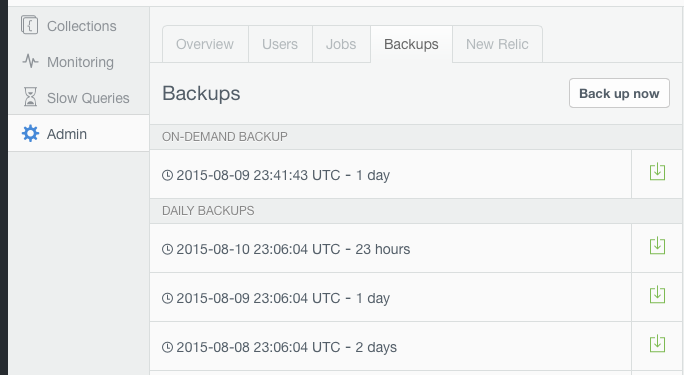 Each of these downloads is in a format that's not easy to import into MongoDB 3.0.

I was surprised when Compose's support team asked if I could install MongoDB 2.6.

The short version is, you need to produce a set of BSON/JSON files from your backup in order to restore it. Support for this was removed in 2.8:

I'm using Homebrew on OS X. I found it easiest to uninstall mongodb and install it using homebrew-versions.

Important: Make sure you back up before you do this.

Install Homebrew versions, if you don't already have it:

(Once you're finished, you can run brew uninstall homebrew/versions/mongodb26 and re-run brew install mongodb.)

Extract tarball. In my case, I ended up with a directory that looked like this:

Inside the directory above, run:

Note: the --dbpath option is only supported in MongoDB 2.6, hence why we had to install it.

This will produce a dump directory containing the data:

Note that there's two hosts and ports listed. In my case, the right one was the one listed second, but you can double-check by looking at the Admin section of the Compose panel (look for “Mongo Console”).

That will restore all the files in the dump/app12345678 directory created by mongodump in the step above.

From the support team:

The reason for this change is MongoDB's move to pluggable storage systems. We haven't yet decided how best to package backups for these scenarios: with any backup you download from us, you can use the extracted files directly to stand up a mongo instance locally, against which you can then perform mongodump/mongorestore operations. For your particular case, it's easiest to use pre-2.8 utils to create the type of files that mongorestore can work with.

Why isn't there a “restore” button next to each backup?

I suggested this along the way, and got this response:

We actually do have an automagic restoration button for each and every backup taken on a deployment... but only for deployments that are provisioned through a direct Compose.io account. The TL;DR on why that has to be is because of how the Heroku partner program integration works. There just wasn't a reasonable and reliable way that we could bring that same data restoration functionality to Heroku-provisioned databases. Sadness all around. For heroku databases, using standard mongodump / mongorestore tools is the only way to restore a backup.

Deploying a Flask App at Heroku