Custom transitions on iOS 7 & a little bit about UX

Once upon a time I decided to replace standard modal transition with a custom one. Standard transitions look too heavy sometimes. My goal was to keep my app like a one large canvas without clear boundaries between controllers. I didn't plan to make spring-based transition just because it looks cool, I wanted to have a subtle animation, less heavy, more lightweight to make the experience with the app more pleasant.

It's especially important when you have that kind of app that requests some sort of user information before it actually gets user to the point of the app, to the main content of the app, before it gets useful.

Of course you optimize number of steps to ridiculous 3-4, very short, with more advanced features hidden by default, with least information needed to start using the app. But you still have that heavy feeling about couple of controllers popping up.

I was pretty much inspired by Fonoteka app by Zvooq, which is unfortunately available only in Russian store, but if you switch your store, you can get it and it's in English. I see it as a great example of great user experience. Most of interactions happen using swipes, in all 4 directions, and everything kept within single canvas that changes its background from controller to controller, it's very smooth.

While I understand that such approach is not for every app and not for my app either, I wanted to make a move towards less obtrusive transitions.

Amazing thing that since iOS 7 you can implement your own animator and animate transitions between controllers in whatever way you want. And because it seemed quite simple to implement I decided to organize a hack day (or two) to see the potential. I setup a two days deadline to produce something decent, otherwise I would just bury another one feature branch and forget about it.

When I tried to implement my own transition, all things fell apart, from my stable code that worked perfectly fine before to status bar style and unwind segues. Hot & sexy controllers that used to surf the screen surface looked more like, well, sinking ships. :(

I read a lot about custom transitions on the web in past few days, I checked every blog post and every git repo I could find, and so I end up being even more frustrated. Because essentially nobody is doing it right. Well, maybe I don't do it right either, but my tests run fine :)

And so I decided to put this dramatic post on Coderwall and I hope the way of telling this story is appropriate enough to be here as it's a little bit more than a copy-paste of some code. Besides that it's probably one of my first blog posts in English and I never had much patience and time before, so I hope you guys won't hate me till the rest of your life and enjoy this journey with me.

The first thing you start with on that long way is adoption of UIViewControllerTransitioningDelegate protocol in your view controller.

Basically this protocol is a contract between UIKit and your controller, so when UIKit needs animator for transition, it comes to your view controller and asks for help.

You simply create an instance of your animator and return it for presentation and dismissal of view controller.

There is a possibility to return self and implement transition code within controller but I like the idea of separating animator from view controller so it can be reused in other parts of the app.

So before we roll out some animations I would like to get a bit deeper in the transition process to better understand what is UIKit doing behind the scenes.

So if you ever checked the view hierarchy of UIWindow you probably noticed that at the top of UIWindow we have UITransitionView and one level below it's UILayoutContainerView. Yeah, those magic views god knows why placed there.

UITransitionView is our playground and UILayoutContainerView is a container for our controller's view.

At the point when UIKit calls animateTransition:, everything is set for us to perform animation. Transition context has containerView that points to transition view where we can mess around without being burnt. It also has two of our controllers for transition.

So let's use debugger and see what kind of setup we have when UIKit calls animator to perform its job. Initially we have transition view, presenting controller that is on screen and modal controller that is not in view hierarchy yet.

Okay that seems legit, but wait a minute, one more thing...

Great, so UIKit just hijacked my view controller, wrapped its view in some UILayoutContainerView and pretends to be me. Let it be then.

That is actually how the view hierarchy looks after we present a view controller with custom modal transition: 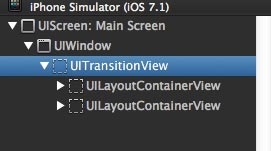 Unlike standard modal transitions, where presenting view controller gets removed after animation, both view controllers persist in hierarchy in their own containers. That is one of the problems with missing appearance events (viewWillAppear: & co) for presenting controller. To fix that problem I spin off beginAppearanceTransition:animated: which will call appropriate appearance methods on view controller. First I thought it's wrong, but it seems to do the trick.

Let's do some animations finally. As you can see from the code snippet below, it's very trivial, it boils down to simple animation between two views. The only thing you have to take care of is calling completeTransition: in the end of transition.

Keep in mind that you must not move views around after calling completeTransition:.

Dismissal animation is pretty much doing the same but in reverse so I am not posting it here.

Unwinding surprisingly does not work out-of-box, so you have to call dismissViewControllerAnimated on presented controller. I do this in unwind action. Roughly the implementation looks as following, but you can do better job and at least check segue identifier:

You can find the full source code at https://github.com/pronebird/CustomModalTransition. There is a neat sample app available so you can run it and see if things work for you.

Cool tutorial, thanks! Can you add the -animateDismissal method to your sample code?

@thgc Thanks! The full source code is available on Github.

By far the best explanation I've seen recently. I have a question though, is it possible to change the background layers' color? I'm making a custom transition but I wan't the user to be able to see what's behind my presented View while animating, without the black background.

@melisadlg I think you can achieve this by changing the background color of UIWindow.