These days I wanted to give Ansible a try. And the first barrier has been its installation. Ansible relies on Python 2.6My sandbox is a CentOs 5 one and the standard version of Python is 2.4.

So first has mentioned in the documentation, I have enabled the EPEL repositories and installed the required dependencies.

And that's where the problems started 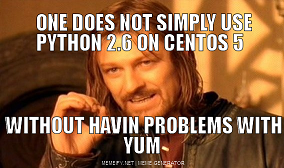 Indeed on CentOs 5, YUM requires Python is 2.4. So you want just update you're version of Python updating the symnlink.

Well, the answer is more a trick than a tip. You have to put BOTH versions into you path, and both must propose the python executable. BUT Python 2.6 must be ahead in the path.

For instance in my config I have

So the trick is

With such workaround I'm able to properly use Ansible and still have YUM working.

Came across this same issue. Thanks for the trick(tip)!

Or you could just install ansible in a virtualenv.

After this nice workaround , did you face any other issues?