I'm starting to work with other people using git and github. Though I'm familiar with pushing, pulling, branching and cloning, I had not regularly encountered merge conflicts until I began RocketU.

add some random code. This creates a gulp web server (after you run npm install):

Then add the files to .git and commit the changes:

All of this is standard. I've learned not to work on the master branch. So to create a new branch named develop and start working on it run:

Now I'll go back to master, add some different code on the same lines and simulate a merge conflict.

Cool, so everything is gravy on our respective branches. When I try to merge develop into master though we'll get a conflict! Git does not know if it should display the file as I have it on master or as I have it on develop. We changed the same lines!

So that's fun. If you look at the file it is a bit scary because your code is all messy and jacked up. Git will display <<<<< and >>>>> denoting where the two branches conflict.

Until recently I would edit this file manually and commit my changes. Today we'll use the git mergetool tool.

I use opendiff cause it gives you a GUI. Another tool is called vimdiff. I always get stuck in Vim and don't like using it cause I'm afraid. Use opendiff. Hit enter. 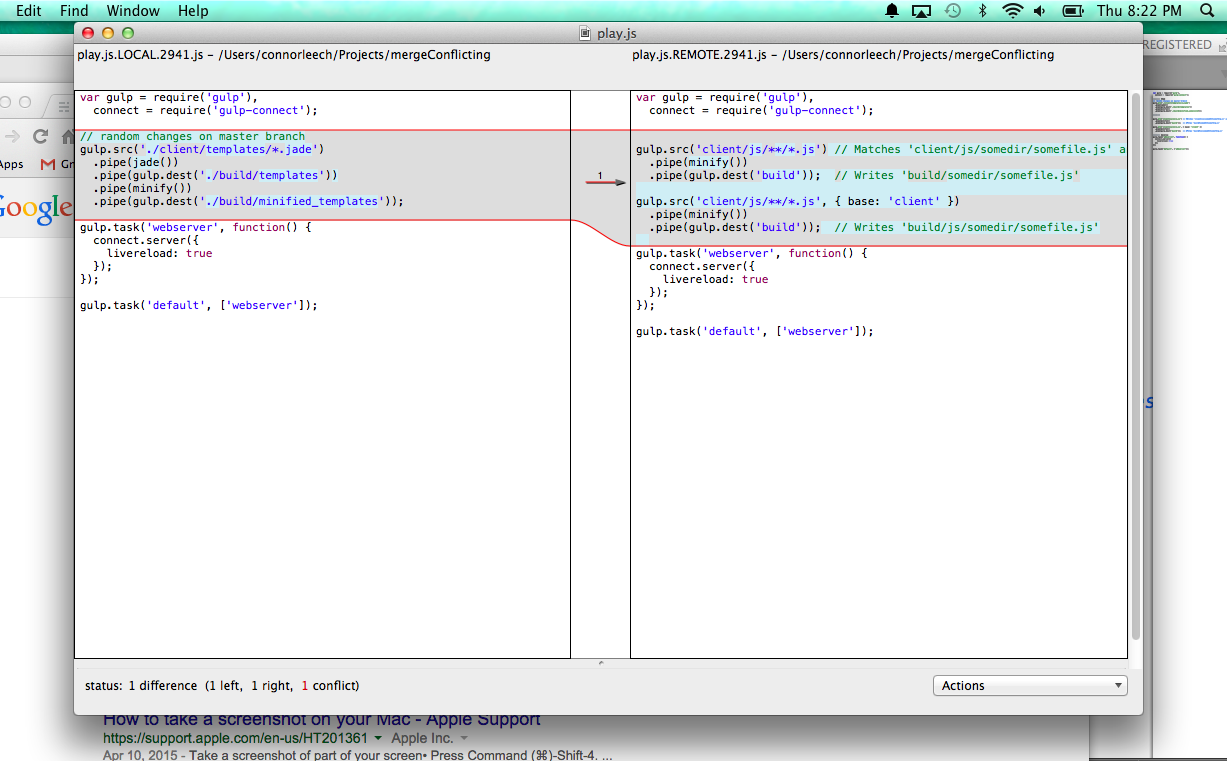 Now you will see the two files and how they differ. Use the arrow keys to select left or right. I will select the right. Then save (File > Save or command + S) then quit (File > Quit or command + Q). Back in the terminal you'll see some stuff.

Congrats you have resolved the merge conflict. We still have to commit our changes. Also notice a new (untracked) file was created. This is the same file when the merge conflict was first created, so you have both versions of the code. If multiple files conflict multiple .orig files will be generated. Delete this file and make the commit of the resolved merge.

I made a comment to play.js. Then I committed the changes

Finally we can delete the develop branch and check that it is gone!

Ultimately the develop commit shows up on the commit history of our master branch. There is another way to do this using git rebase. I'll save that fun for later